Your baby can now squint, frown, grimace, smile, pee, and possibly suck its thumb! Thanks to brain impulses, the facial muscles are getting a workout as its tiny features form one expression after another. The roof of your baby's tiny mouth is fully formed now, and its constant sucking reflexes are helping to create full, cherubic cheeks. There is now some digestive system activity as well: The intestines are producing meconium, which is the waste that will make up its first bowel movement after birth.Your baby's liver starts making bile this week – a sign that it's doing its job right – and the spleen starts helping produce red blood cells. The kidneys are producing urine, which gets released into the amniotic fluid – a process that will continue until birth. Baby can grasp, too, and if you're having an ultrasound soon, you may even catch baby sucking its thumb. The body's growing faster than the head, which now sits upon a more distinct neck. By the end of this week, the arms will have grown to a length that's in proportion to the rest of the body. Although the legs still have some lengthening to do. By now your baby could be sprouting some hair (though the final color may not be determined until birth) and the eyebrows are filling in, too. Hair growth isn't limited to the baby's head, though. Your baby is starting to develop an ultra fine, downy covering of hair, called lanugo, all over its body. As baby accumulates fat later on in your pregnancy, it will take over the function of keeping your little bean toasty, so most of the lanugo sheds. Some babies, though — especially those born early — still have a fuzzy coating at delivery (it disappears soon afterward). Though you can't feel his tiny punches and kicks yet, your baby's on the move almost constantly — and those movements are a far cry from those jerky twitches of last trimester (though you won't feel any of them for weeks to come). They are now ballet-like, smooth and fluid. Around this point, Precious Images will be able to tell you if you are having a girl, or a boy, if you want to know!! If you're having a boy, the prostate is forming, and if you're having a girl, her ovaries are moving down into her pelvis. 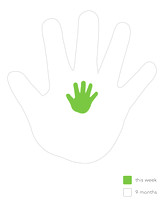 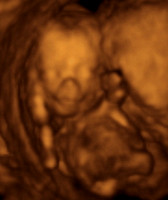 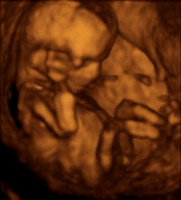 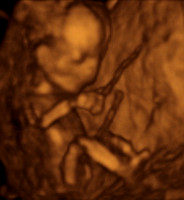 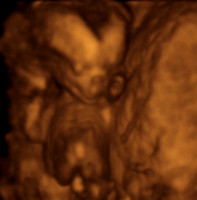